Is a Whole House Surge Protector Worth It? 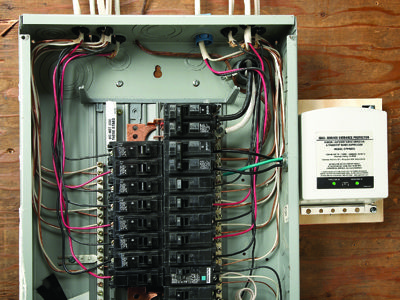 While more popular, power strips aren’t the best way to protect your home from power surges. With power surges on the rise throughout the United States and turbulent weather unexpectedly popping up, the best way to protect your home, family and appliances is with a whole house surge protector. While it’s a large investment, it’s one that pays off in the end. Here’s more information.

While power surges can last only a few millionths of a second, the amount of voltage delivered can be catastrophic. In fact, with tens of thousands of volts delivered in less than a second, your circuit boards, entertainment systems, phones, computers and more could be destroyed in no time.

Lightning-based surges are the most powerful and the most feared. Luckily these are also the least common amount surge types. A lightning strike has to be less than a half mile away to cause incredible damage to your home, appliance and electrical system. But it does happen, so it’s important to protect your home as much as possible.

The second type of surge, and the more common of the two, is surges from downed power lines. These surges can be minor and not even cause issues at first. But later down the road, if your home doesn’t have proper protection, you’ll see issues in your appliances. In fact, they could even stop working from the minor surges experienced by these downed power lines.

How to Protect Your Home

An individual surge protector, or a strip that you plug in, added an added layer of protector to your home and electrical system. These buffers between your appliances and the wall often come in a dizzying array of options, some ranging upwards toward $350.

Want to learn more? We’re here to help! We have licensed electricians who know how important it is to protect your home. They can give you the best recommendation for protecting your home from surges. Contact us today to find out more.